OTPManager for iOS is a 2FA Authenticator and also an OTP Manager. There are no import and export functions as there are in the macOS version, and it is adviced to use the macOS version for backups. 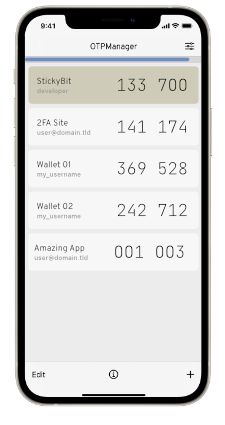 Scanning otpauth QRCodes with the camera of the iPhone is an excellent way to add OTP Tokens to the manager. Now with the support for scanning Googles Authenticator Export QRCode type (that supports up to 10 accounts in one QRCode image), a migration from Google's authenticator to the OTPManager is lightning fast.

Combine that with the drop-import functionality of the macOS App: migrating is as easy as making a screenshot of a QRCode Image on your iPhone and AirDrop it to the Mac, to import it in OTPManager.

The iOS version is iPhone only, as we cannot see the added value in having an iPad App. Also the dimentions of the iPad could make the interface a little awkward.

OTPManager for iOS implements optional Biometric security, which you can configure in the Settings. you can lock access to to whole application or just when adding new tokens.